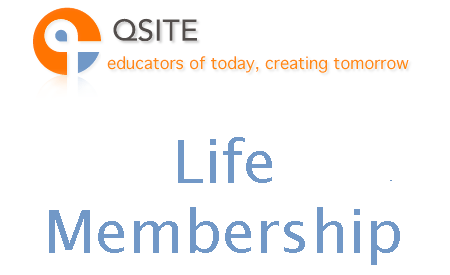 Posted at 17:11h in General, Membership by qsiteeduadmin 0 Comments

I wish to use this issue of QUICK to remind QSITE members about what constitutes Life Membership of QSITE. Definitions distort over time and history’s intent is often lost as successive Boards of QSITE reinvent policy, as they should. Life membership has not changed in its intent and value, so I feel safe in reiterating the core ideas of the award to both remind the Board and inform the membership.

Life membership is award that recognises the extra-ordinary contribution of a long serving member to the shape of what QSITE is.

There are not selection criteria for life membership and neither should there be.  It is not a level of membership to apply for or a set of standards to meet.

It is a declaration by the Board, on behalf of the membership, that a person’s contributions to QSITE have created some of the organisation’s spirit and soul. The Life member has dedicated some of their “Life” to the organisation and shaped its direction and given it guidance for a long time. They are role models for the members and their leader peers. They are extra-ordinary members in many ways.

The people who are awarded Life membership:

They are above all, held in the highest regard by the Board and the membership, and their integrity and contribution is valued beyond the organisation, to the point that their work and the QSITE name is synonymous.

The life member, like many QSITE members, is usually also a valued and respected ICT in Education Leader and a great teacher. Although this work defines the fabulous contributor they are to the profession, the QSITE Life membership is bestowed primarily for the contribution to the organisation and its parent organisations, in Australia and the world.

This sets Life Membership apart from other awards in the organisation, for which there are criteria and standards. Other awards recognise people for their professional work in their career. Life members usually by implication contribute much to the field and are leaders in their profession, but by definition a life member is recognised for their work and leadership within the non-profit arena.  A life member cannot nominate themselves or have peers nominate them. Suggestions for Life membership is a right and a responsibility for Board members who in the end need to unanimously agree that Life membership is deserved. Such a nomination should be in writing, and discussed at a Board meeting prior to the AGM. It is then celebrated by the membership and often awarded at a public event of the organisation, usually the AGM but not necessarily so.  It is an occasional, not annual award and should be rarely awarded.

QSITE Life membership is an important cornerstone of the professional organisation and represents a maturation and significant standing for the organisation in the community.

The Life members of QSITE are:

Each of these Life members have shaped the organisation in significant ways.

Sorry, the comment form is closed at this time.